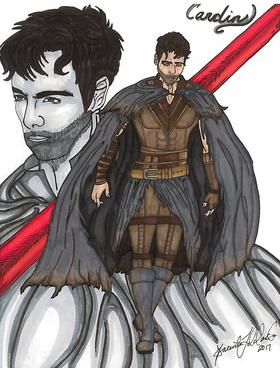 Cardin grew up learning to become a Warrior, training and honing his abilities as a Mage while practicing his technique with a longsword.  He was skilled, adept, and cunning, and had the makings of a future leader of the Warriors’ Guild…until he turned down membership.

On the day of induction, he refused and turned away from the Guild, betraying his friends and mentors.  He believed that the Guild had become corrupt and lost its way, and refused to be a part of an organization controlled by greed and lust for power.

For nearly ten years, he has lived as an outcast, scrounging resources where he can, living by hunting and taking any odd jobs he could find for a freelance Mage.  He had hoped his actions would have changed the Guild, but no one listened.  Instead, his actions have left him as a loner, an outcast from society.