- Print available at Amazon and all major online book stores. 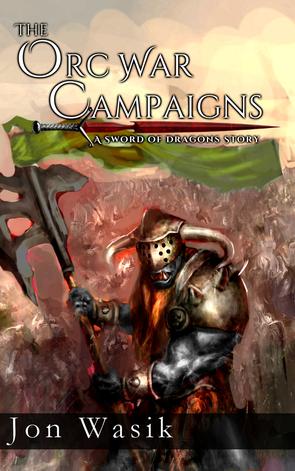 The Orc War Campaigns is an exciting anthology of short stories written as a 10-episode series and bridges the gap between books 1 and 2!

In the wake of the Battle for Archanon, the four kingdoms of Edilas forge a bold new alliance.

Amaya Kenla, a former Warrior betrayed by her commander and imprisoned under the Prince’s controversial laws, is released by King Beredis, along with the rest of her team.

Their celebration is cut short when a boy in blood-soaked rags brings frightening news – an orc army has destroyed his mining camp, and are set to invade Tal.

Seeing Amaya’s potential, the King inducts her into the Guardians of Tal – elite soldiers tasked directly by the throne with the most dangerous and delicate missions.

When a new orc general reveals himself and displays unusual cunning, intelligence, and ferocity, the tide of the war shifts. Even when the orcs appear defeated, he strikes at the very heart of Tal.

Amaya’s most dangerous mission comes soon after: find this new general, and capture or kill him. The only way to do this is to sneak in behind enemy lines, into the heart of the Wastelands.