Edilas is the heart of human culture on Halarite, with a written history spanning ten thousand years!  Edilas boasts a variety of landscapes ranging from vast forests, towering peaks, endless deserts, and more, Edilas still holds mysteries and surprises for the people of the Four Kingdoms.

The most defining feature is the Great Road, an ancient road that stretches coast to coast.  Despite 10,000 years of history, no one has ever known who built this enduring feature. 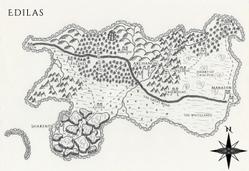 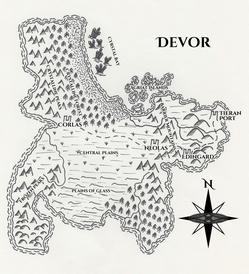 Halarite is the world central to the Sword of Dragons stories.  It was only in the past century that the four kingdoms have begun to venture out into deep sea, thus discovery the other three continents.

Devor and Asirin are mostly charted, if not explored, but Trinil has only just been discovered, and the full extent of its shores has yet to be charted. 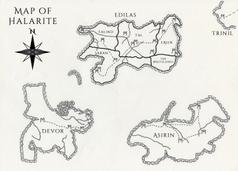 Devor was the first continent discovered by explorers from the Four Kingdoms after significant advances were made in sea navigation by Falind.  Initially wishing to claim the new land for themselves, Falind quickly realized that travel time and the resources required to establish a new colony was beyond their capabilities due to their focus on an ongoing Lesser War, and Sharenth agreed to help.

During peace negotiations following the Lesser War, it was agreed upon that Devor, and any other new lands discovered, could be jointly explored by all four kingdoms.

Due to the frigid temperatures and ice fields in the south and the crystals that permeate land and sea in the north west, the only sea ports are in the east, and travelers and explorers must traverse the Barrier Mountains to access the majority of the continent.

The map of the known lands of Halarite may be seen below, along with more detailed maps of the continents of Edilas and Devor!  Check back later for more maps as the series continues to grow.