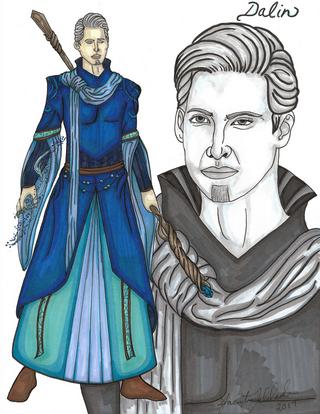 Considered a young Wizard at the age of 287 years old, Dalin was born and raised in the Grand Wizard Hall, a complex constructed in a realm beyond Halarite.

Dalin is brash for a Wizard, and finds the policies and attitude of the Wizards’ Guild frustrating and counterproductive.  He often goes against the will of his mentors and has been chastised and punished many times for it.  He was very nearly held back from graduating beyond apprenticeship for this reason.

The only reason he does not leave is that he finds the training itself valuable, and the knowledge contained within the Guild library invaluable.

On a leap of faith, the Master Wizard Aenar decided that giving Dalin increased responsibilities would allow him see the bigger picture and better understand why the Guild works the way it does.  That was when he learned about the Sword of Dragons, how it was created, and why.

When he learns about a rogue Mage on the hunt for the Sword, Dalin is the only Wizard who truly believes her to be a threat.  With no support from his peers or mentors, he must seek help on Halarite itself.